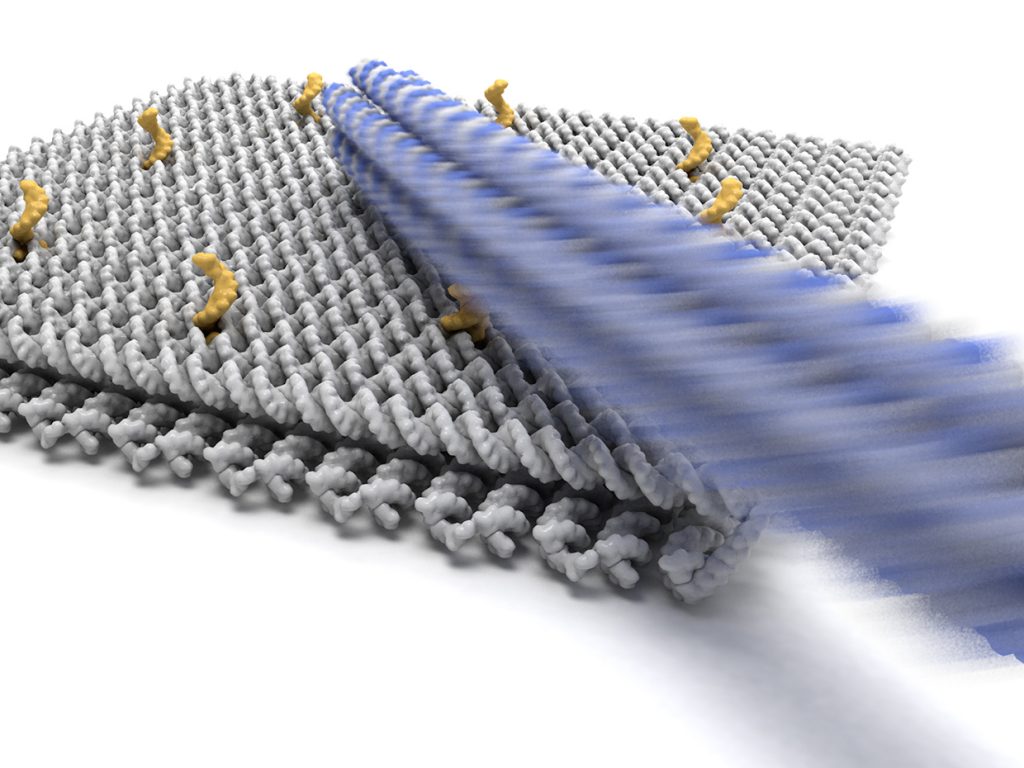 Researchers at the Technical University of Munich (TUM) in Germany have given a big boost to DNA-based robotic systems by using electric fields to speed up their movements by five orders of magnitude over previous DNA systems.

Prior to this work, which the German scientists descibe in today’s issue of the the journal Science, the main issue preventing previous DNA-based molecular machines from operating faster was that they were dependent on DNA’s molecular cues.

For example, most DNA-based molecular machines previously were operated by a variety of DNA molecular manipulations, including DNA hybridization with externally added DNA “fuel strands,” the action of DNA-cutting enzymes, a change in buffer conditions (such as pH levels), or the use of chemical photoswitches, like azobenzene, that can collect light to trigger reactions.

For various reasons, the resulting machines were very slow, almost all working on the timescale of minutes to hours, according to Friedrich Simmel,  a professor at TUM and co-author of the research.

“Compared to other previously demonstrated ‘robotic systems’ or assembly lines, movement and positioning of components electrically is much faster,” said Simmel. “We estimate it’s about 100,000 times faster than typical DNA walkers.”

Simmel concedes that the overall speed of an assembler will depend also on the speed of the reactions of the components, and also on the time required to release/move products and localize new reactants.

In order for the DNA in their experiments to reach these new speeds and move away from these DNA-based molecular cues, Simmel and his colleagues started with an established technique for molecular self-assembly: DNA origami. This technique involves the use of DNA strands that have been folded into structures resembling artfully folded paper.

The TUM scientists used the DNA origami technique to create a rigid base plate that is connected to a long arm (all consisting of DNA molecules) via a flexible joint. The structures are fixed with their base plate on the bottom of a custom-designed sample chamber filled with water in which the scientists create electric fields with arbitrary directions in the plane.

Because DNA is negatively charged, it can be manipulated by the electric field in a way similar to electrophoresis in which molecules are transported through a fluid or gel under the influence of an electric field. By controlling the direction of the DNA, the scientists were able to induce arbitrary angular movements of the arm relative to the base plate.

“We can create ‘docking sites’ on the base plate,” said Simmel. “We can therefore use the electric fields to move the arm from one defined position on the plate to another. We can also switch off the field after placement of the arm at a particular docking site, where it remains, if the binding site is strong enough.”

Simmel adds that in this approach—unlike previous techniques for triggering DNA movement—it’s not necessary to add any fuel from the outside or to change buffers.

“Electric manipulation of DNA is very fast, and electric fields can even be used to reduce the stability of the DNA docking interactions and thus speed up unbinding of the arm from the plate,” added Simmel.

Of course, DNA is a biological system and as such don’t typically respond well to electric fields. Simmel notes that the robo-arm structure could be destroyed by the application of excessively high fields. However, for the manipulation and movement of DNA in these experiments only low-level electrical fields are required.

An important feature of the system, according to Simmel, is that the robot arm not only serves as a “pointer” for observation, but it also acts similar to a lever arm. An external electric field generates a large force on the arm as it carries many charges, and this force is used either for motion around the pivot or for unzipping of a docking duplex. “We also take care not to “unwind” the origami structure by typically applying alternating electrical fields,” he added.

As for the potential applications, Simmel believes that assembling complex molecular structures in a similar fashion as a 3D printer is a fascinating idea. However, the assembly tasks that can be realized at the moment may be more in line with those of biomolecules, such as when RNA or DNA polymerase are used to create polymers with a certain sequence of DNA bases, or when ribosomes create proteins by making long chains of amino acids which then “fold” into a specific structure.

While 3D printing of molecules may capture the imagination, the goal of this work, according to Simmel, was to point out a new direction for the manipulation of DNA nanodevices.

Simmel emphasizes that traditional chemistry is very powerful and can create huge amounts of substances much faster. He concedes that in most cases it will be close to impossible to compete with industrial chemistry production scales, where reactions take place on the scale of a 1L beaker or a 1000L tank.

“Since our manipulation method is surface based it will be necessary to aim at the production of molecules or nanoconstructs that are very difficult to produce, even in small amounts,” he added.

As an example, Simmel calculates that if they could induce a chemical reaction with a robot arm every millisecond, then 1 million robot arms in parallel could generate 1 billion bonds per second. Running the system for one hour would generate 3.6 x 1012 bonds/molecules, which corresponds to 6 pico-moles of product. While this is not an insignificant number, it also is not much relative to industrial chemistry.

While identifying a process that would make sense for this DNA robotic system remains paramount, Simmel and his colleagues will continue work on creating a reliable mechanism for controlled pick-up and release of molecules or nanoparticles by the arm that allows them to move objects from a pick-up area to a target area.