U.S. regulators have approved the first piece of consumer tech for a neurological condition: a medical-grade smartwatch that monitors for dangerous seizures and sends an alert to summon a caregiver’s help.

The wrist-worn sensor tracks many of the same things as a FitBit or an Apple Watch, but the new device has one important feature that other wearables do not: It also detects surges in skin conductance, an indicator of disturbances in the nervous system that are triggered during an epileptic attack.

These spikes in electrical activity originate in the brain, but can be measured noninvasively on the surface of the skin. The Embrace smartwatch records these electrical signals along with 3-axis accelerometer data, and uses a proprietary algorithm to signal when someone is having a convulsive seizure.

During an attack, the device’s square face vibrates, a ring of LEDs spins, and an alert gets sent via Bluetooth to a smartphone in the wearer’s pocket. The app then sends a distress signal—either a text message or phone call—to one or more pre-specified caregivers. 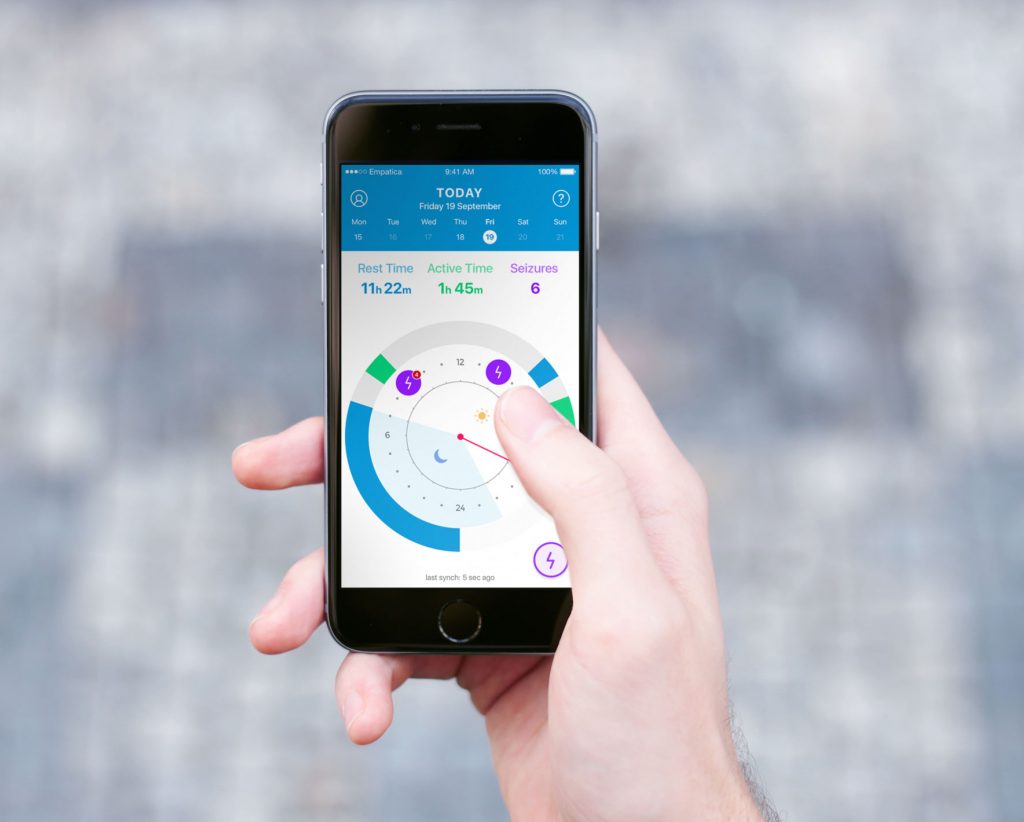 Subscription plans for the service start at about US $9 per month, and the hardware itself costs $249. Embrace comes in five colors, two of which have quickly become bestsellers: “Bright pink and bright blue are very popular with kids,” says Matteo Lai, CEO and cofounder of Empatica, which announced its device’s regulatory clearance this week.

For now, Embrace is only proven to accurately detect generalized clonic-tonic seizures, also known as grand mal seizures. When tested on 135 patients who were monitored for a collective total of more than 6,500 hours, the device correctly identified nearly every single seizure, with a false alarm rate below that of the seizure frequency for most individuals. Empatica scientists published much of their clinical data last year.

The company is also currently validating the technology for “partial” seizures, and for tracking stress levels that might trigger an attack. But according to Lai, the company chose to start with monitoring convulsive seizures because they’re the most deadly.

Around one-third of all people with epilepsy cannot currently manage their attacks with anti-seizure medications. These are the people that Embrace is aimed at because an unexpected seizure while driving or swimming can lead to disastrous outcomes if no one is there to notice. And in fact, even someone who’s doing little more than lying in bed—as Morgan McGrath was doing one fateful day in November 2016—can still experience a fatal complication called “sudden unexpected death in epilepsy,” or SUDEP.

McGrath was almost one of the estimated 3,000 lives lost each year in the United States because of this poorly understood phenomenon. Fifteen months ago, the 26-year-old teacher from Fulton, Mo., suffered an epileptic seizure that left her unresponsive, frothing at the mouth, with blue lips, and not breathing. McGrath’s wristworn Embrace device sent her mother an alert. Her mother called the paramedics. And thanks to a timely response, McGrath is alive and well today.

“It was and will probably always be the best purchase I’ve ever made,” McGrath writes in a testimonial on the Empatica website.

Not all Embrace users are as fortunate, though. In a case report published last year, Empatica co-founder and chief scientist Rosalind Picard and her colleagues described a 20-year-old who was wearing the device. It went off one morning, altering his family of a probable convulsive seizure. Yet, it took 15 minutes for anyone to show up, at which point the young man was dead.

This shows the limitations of any technological fix to a challenging medical problem. “Embrace was successful,” says Picard, an electrical engineer at the MIT Media Lab. The problem was that no doctor had ever told this man’s parents about the risk of SUDEP: “They didn’t even know that minutes mattered,” she says.