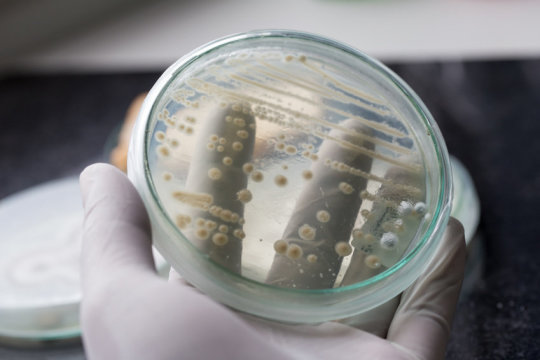 Stanford University bioengineers have figured out a way to make noscapine, a non-narcotic cough suppressant that occurs naturally in opium poppies, in brewer’s yeast.

The researchers inserted 25 foreign genes into the one-celled fungus to turn it into an efficient factory for producing the drug. Many of the inserted genes came from the poppy, but several came from other plants and even from rats. All those genes were recipes for enzymes: protein machines that, working together, can build complex substances from simple starting materials.

The researchers also modified some of the plant, rat and yeast genes, as well as the medium in which the yeast proliferates, to help everything work better together. The result was an 18,000-fold improvement in noscapine output, compared with what could be obtained by just inserting the plant and rat genes into yeast.

“This is a technology that’s going to change the way we manufacture essential medicines,” said Christina Smolke, PhD, professor of bioengineering.

An additional hundredfold improvement will be necessary for commercial viability, she said, but much of that can be achieved by substituting large-scale bioreactors for simple laboratory flasks.

A paper describing the research will be published online April 2 in the Proceedings of the National Academy of Sciences. Smolke is the senior author. Yanran Li, PhD, a former postdoctoral scholar who’s now an assistant professor of chemical and environmental engineering at the University of California-Irvine, and postdoctoral scholar Sijin Li, PhD, share lead authorship.

Promise as a cancer drug

Noscapine’s cough-suppressing capability was discovered in 1930. The drug has been widely used since the 1960s as a cough medicine throughout Asia, Europe and South America, as well as in Canada, Australia and South Africa. Preclinical trials indicate potential for noscapine as a cancer drug with less toxicity to healthy cells than currently available chemotherapies.

But the only viable source of noscapine is opium poppies. Many tons of noscapine are extracted annually from the plant, which takes a full year to mature. While noscapine itself is harmless, the poppies’ illicit potential requires costly controls and restrictive regulations. The plants can be legally grown only in a concentrated geographical area. Half of all poppies produced for noscapine are in Australia, and the rest are mostly in India, France, Turkey and Hungary, making global noscapine output subject to local environmental events and to varying soil and nutrient conditions. In addition, naturally occurring noscapine must be thoroughly separated from numerous molecular companions, narcotic and otherwise, that don’t occur in yeast.

The yeast Smolke’s group bioengineered can spew out substantial amounts of noscapine in three or four days. The investigators achieved this result by stitching three separate sections of the noscapine biosynthesis pathway into a single yeast strain.

Initially, noscapine output was meager, Smolke said. “Traditionally, we’ve gotten our medicines from the natural world, mainly from plants. But the plants’ molecular assembly lines have evolved to optimize the plants’ survival, not to churn out buckets of one substance we humans want to get our hands on,” she said. “Plus, we’re putting them into our yeast strain, which is foreign turf. A yeast cell and a poppy cell have a lot in common, but in some respects they’re as different as Earth and Mars.”

Every enzyme catalyzes its own limited set of chemical reactions. So, the synthesis of complex chemicals requires a whole assembly line of different enzymes working in concert with one another, ideally with each enzyme in the production chain generating just enough of its given intermediate product to keep the next one busy. As with a factory conveyor belt, too little activity, or too much, at any point can jam up the line. Enzymes need energy supplies, too, and some of them require the assistance of additional molecules that may abound in the organism they come from, but not necessarily in a yeast cell.

“It’s as if we’re grabbing a couple dozen soldiers from different units, deploying them on Mars, and telling each of them, ‘Now, not only am I putting you on Mars, but I want you to get some serious work done here, and I want you to work with these other soldiers you haven’t worked with before — many of them total strangers,'” Smolke said. “Good luck with that. We modified them to keep them in shape on this planet and to get along with one another better, and we nudged the yeast to help these enzymes grab the resources they need to get the job done.”

That entailed, among other things, splicing in rat genes that direct the production of dopamine, a key intermediate in noscapine synthesis. Dopamine’s production in plants is poorly understood, but because of dopamine’s importance as a crucial chemical in the animal nervous system, the enzymes responsible for its production in mammals have been studied intensively.

The scientists used CRISPR, a gene-editing tool, to alter inserted genes so that the enzymes for which they coded would work most efficiently amid the exotic acidity, osmotic character and chemical composition of their new home. They also souped up the yeast’s production of a chemical whose levels would have otherwise been too low to sustain robust noscapine production.

“We’re no longer limited to what nature can make,” Smolke said. “We’re moving to an age where we can borrow nature’s medicine-manufacturing processes and, using genetic engineering, build miniature living factories that make what we want.”

Stanford’s Office of Technology Licensing holds pending patents on intellectual property associated with the findings in this study.

Antheia Inc., a biotechnology company based in Menlo Park, California, that Smolke co-founded in 2015, has licensed the technology from Stanford and is now working to commercialize noscapine production in yeast. Smolke is Antheia’s chief executive officer.