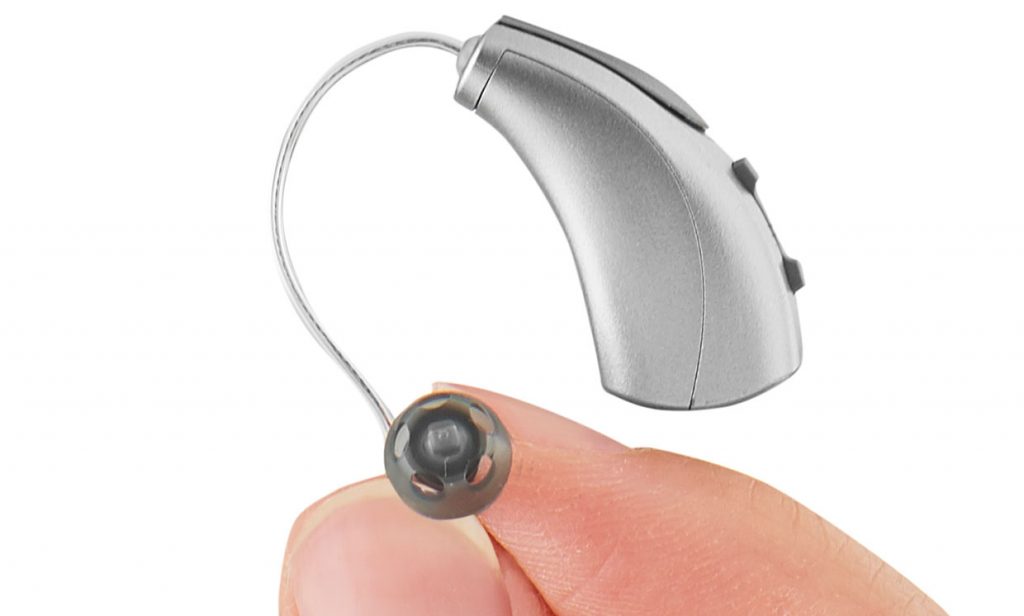 With the new device, Starkey aims to overcome the stigma of hearing aids as medical devices for old folks rather than wearables for the tech-savvy crowd. The company promotes its Livio AI hearing aid as a multifunctional device that combines features from wireless headsets, fitness trackers and health apps, and language translation programs.

Pitching it as a smart wearable could encourage more people with hearing loss to consider hearing aids at a time when most of the 466 million people worldwide who live with disabling hearing loss do not use hearing aids because of the relatively high cost and social stigma.

“What we want to do is make hearing aids cool,” says Brandon Sawalich, president of Starkey. “It’s not about hearing loss, it’s about hearing gain.”

That vision is what attracted Achin Bhowmik, chief technology officer of Starkey, to leave his executive career at tech giant Intel and join forces with the Midwestern hearing aid company headquartered in Eden Prairie, Minnesota about a year ago.

Amid all the extra features, the Livio AI hearing aid still fulfills its core function. It uses a combination of directional microphones and machine learning algorithms to classify the wearer’s listening environment: chatting outside in a backyard surrounded by natural sounds, having a conversation in a loud restaurant, or listening to music at a concert. The hearing aid then adjusts to the best listening mode for the wearer’s acoustic conditions.

A near-field magnetic induction system provides a wireless link between the hearing aids worn in each ear, which enables the system to seamlessly balance user adjustments to volume or listening environment mode. The ear-to-ear link also enables binaural audio signal processing, which can enhance the wearer’s ability to hear speech in a noisy environment. For example, the hearing aid system may choose to amplify the voice of the person standing directly in front of the wearer.

Together, hardware and software help deliver the “best-sounding hearing aid we have released,” Bhowmik explains. Still, he seemed especially excited by the smart wearable functions built on top of that core hearing aid.

“I believe that with traditional sensors and AI, we are going to do to the hearing aid what Apple did to the phone,” Bhowmik says. After all, it was the iPhone that showed many consumers the possibilities of a smartphone with added features such as a camera, music-playing capability, and mobile Internet access.

The Livio AI hearing aid has a fitness tracker with inertial sensors that can count steps and track daily physical activity. But it also comes up with daily wellness scores for both physical and mental health and reports the scores on an associated smartphone app. The mental health “brain score” is based on hearing aid usage time, the degree of social engagement derived from the acoustic environment, and the extent of active listening.

Research has shown that hearing loss can be a risk factor for elderly people developing dementia, given how hearing loss can impact a person’s social life. “When people get older and don’t hear well, their confidence goes down and they tend to withdraw from social engagement,” Bhowmik says. “It’s a downward spiral.”

The hearing aid can also translate between 27 languages. The language translation works in conjunction with a smartphone app. If an English speaker wearing the device says something to a Chinese speaker, the Livio AI system would translate the words and display them in Chinese characters on the English speaker’s smartphone screen. If the Chinese speaker said something in return, those words would be directly translated into spoken English in the ears of the hearing aid wearer.

Starkey included the language translation function in part because many potential customers seemed eager to have that capability. That may not be a big surprise, Bhowmik says, considering that many hearing aid wearers are older people with the time and money to travel. Starkey worked with several notable AI companies to integrate language translation. 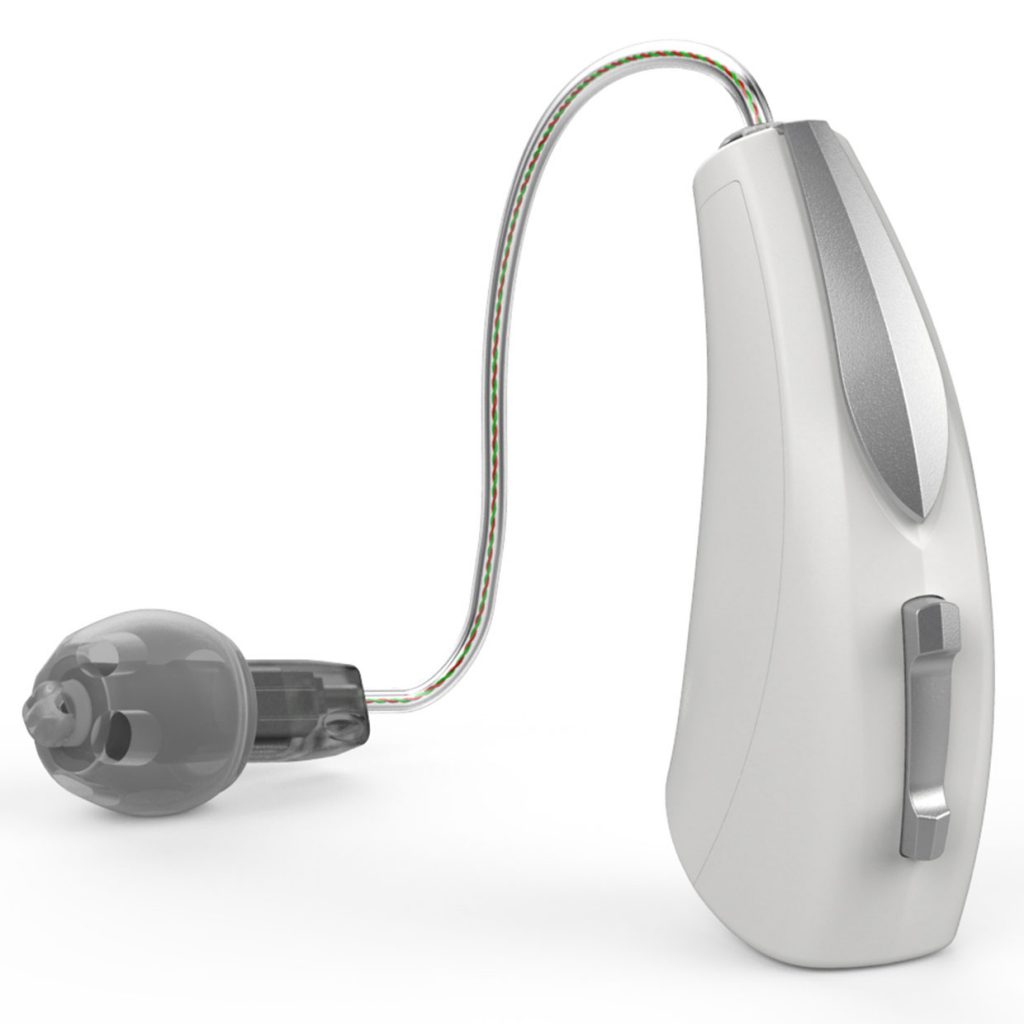 The new hearing aid also functions as a generally hands-free way to respond to phone calls or even stream the audio from a Netflix show playing on a smart TV into the wearer’s ears. Toward that end, the hearing aid has a dual-band 2.4 gigahertz radio for wireless communication with smartphones, TVs, and other devices. (Both Sawalich and Bhowmik said they spoke with me over the phone through the new hearing aid.)

Beyond the Livio AI functions available at launch, Starkey plans to later add a medical alert system to detect falls among elderly wearers and automatically send text message alerts to emergency contacts. Falls represent the leading cause of injuries and deaths from injuries among older Americans; an older adult falls every second of every day in the United States. That feature is still undergoing some trials and will become available to customers through a software update.

The artificial intelligence running under the hood of the Livio AI system mostly relies on traditional machine learning algorithms rather than the potentially more powerful deep learning algorithms. That’s in large part because the hearing aid’s onboard computing power remains limited, and Starkey didn’t want critical AI-boosted listening or other functions to rely upon Internet access to additional cloud computing. Still, features such as language translation do rely upon having Internet access and access to cloud-based deep learning systems that can perform the computing-intensive natural language processing.

Even having machine learning embedded in the Starkey hearing aid to automatically adjust for different sound environments could be a big help for wearers, says DeLiang Wang, a professor of computer science and engineering at Ohio State University, who has worked with Starkey in the past but was not involved with the Livio AI development. He says typical hearing devices usually lack such automatic “environment classification” and typically require wearers to manually adjust settings.

Wang’s lab has been working on leveraging deep learning to help hearing aids automatically and selectively boost certain sounds while dampening others. Solving that “cocktail party problem” of training AI to home in on a specific voice or sound remains a huge challenge, but one that deep learning could help overcome.

But for now, hearing aids still cannot fully leverage deep learning because the miniaturized devices lack the onboard computing power to run the algorithms. “I’ve yet to see the first hearing aid which really incorporates deep learning for noise removal,” Wang says.

Despite the lack of onboard computing to support deep learning, the Livio AI hearing aid still has triple the computing power and double the local memory capacity in comparison with prior Starkey hearing aid products. It can also sustain several days of continuous use on a single battery.

Whether or not the new Livio AI hearing aid technology can win over a new group of customers remains to be seen. Starkey declined to say for how much the company will sell the device to hearing specialists, who in turn would typically charge a different price to customers for a combined package that includes hearing exams, hearing aid fittings, and follow-ups. Even at the lower end of the price range, hearing aids typically cost hundreds of dollars and more frequently can cost thousands of dollars.

Starkey president Sawalich acknowledged that the Livio AI hearing aid would not be for everybody. The ideal customer might be someone who is reasonably tech-savvy and comfortable with using smartphone apps, and perhaps has a relatively active lifestyle. At the end of the day, some people may not need the “fully loaded Lamborghini” of hearing aids and may simply want the basics, Sawalich says.

But for people who are already seriously contemplating spending thousands of dollars on ordinary hearing aids, the capabilities of the Livio AI hearing aid could prove enticing. After all, why reach for the smartphone in the pocket or strap on smart watches and fitness trackers when your hearing aid is already along for the ride?