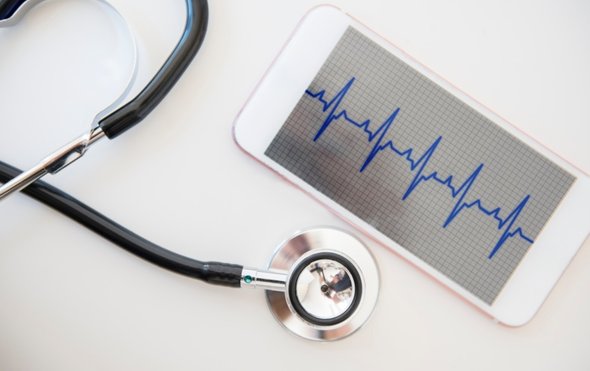 Like many of us, Theodoros Zanos hates going to the doctor. A researcher at The Feinstein Institute for Medical Research in Manhasset, N.Y., he tends to avoid his general practitioner unless he’s already sick or in pain. But because he loves his smartphone and other gadgets, he wondered why a piece of hardware couldn’t tell him when he really ought to see a doctor—no ifs, ands or buts. Zanos and his colleagues are working on technology they hope might one day be able to listen to and decode the body’s electrical signals, catching warning signs of illness.

“Since I’m always on my phone and it keeps reminding me of almost everything, I always thought it would be a cool idea to work on technology that would enable my phone to tell me to go to the doctor when I’m about to get sick—or, even better, automatically treat the disease—before the symptoms appear,” says Zanos, an assistant professor at Feinstein’s Center for Bioelectronic Medicine. “That’s the technology we’re trying to develop.” 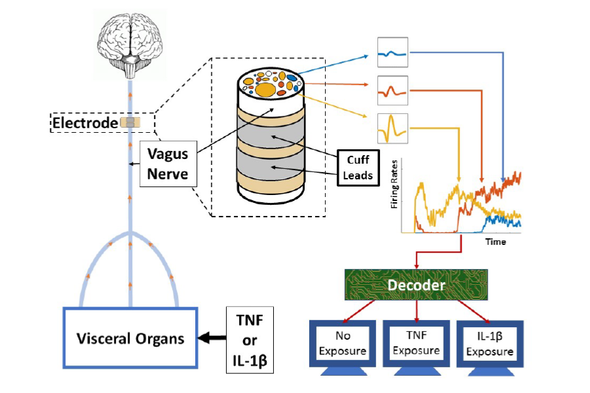 This diagram of the study’s methodology depicts how electrodes were placed on the vagus nerves of mice (left). The animals were injected with the cytokines tumor necrosis factor (TNF) and interleukin-1 beta (IL-1β). A decoding system (right) used a machine-learning algorithm to analyze data from the electrode, determining information about the mice’s exposure to the cytokines—which are chemicals that cells use to signal one another to trigger immune responses.

It will take a significant amount of time before researchers can diagnose and possibly treat disease using electrical impulses. But Zanos believes some conditions such as diabetes, rheumatoid arthritis, Crohn’s disease and chronic obstructive pulmonary disease could be monitored with nerve implants in the not-too-distant future.

Zanos and colleagues at Feinstein, along with collaborators from GE Global Research, published a study this week in PNAS suggesting some basic steps toward this goal. The study, which examined electrical signals in mouse nerves, describes how the researchers isolated and decoded signals related to two different cytokines—molecules that cause inflammation and are also used by cells to communicate inflammatory states and trigger immune responses.

The researchers injected some of the mice with the cytokines interleukin-1 beta and tumor necrosis factor. They implanted cuff electrodes below the animals’ heads on an exposed part of the vagus nerve, a major channel for body–brain information exchange. The electrodes recorded electrical impulses, which were then processed with a relatively simple machine-learning algorithm called Naive Bayes. It differentiated between signals from mice when they had been exposed to the cytokines and when they had not. The study is the first in which specific cytokine exposures were detected by using neural signals, according to the researchers.

Could a similar device one day be implanted in humans to tell users when something is wrong and it is time to see a doctor? The concept is not far-fetched. The vagus nerve goes down the neck and runs through the visceral organs. Vagus nerve stimulator devices have been implanted in epilepsy patients since 1988, and received FDA approval for treating the condition in 1997. The mechanism of this approach is poorly understood, but it can help control epilepsy symptoms—sometimes reducing seizures by over 50 percent—when anti-seizure drugs are not effective and conventional surgery is not an option. The implants were approved in 2005 for treating depression and are being studied as a potential therapy for rheumatoid arthritis, Alzheimer’s disease, multiple sclerosis and other chronic conditions.

Eavesdropping on impulses coursing through the 80,000 to 100,000 fibers in the vagus nerve is challenging, however, partly because the nerve is insulated by a sheath of connective tissue. Stimulators have an effect because they apply electrical fields that are many times greater than the vagus impulses themselves. “The principle in our study is the same as vagus nerve stimulation, but we’re not stimulating—we’re recording,” Zanos says. “If you use the same approach as stimulation and just try recording, most probably you wouldn’t get anything because the connective tissue attenuates the signal. What Harold Silverman, a co-author on this study, did that’s novel is he de-sheathed the vagus nerve in mice before placing the electrode. That’s not been done yet in humans.”

Another challenge is correctly interpreting the data gathered from these tiny neural signals, and removing extraneous “noise” from the heart and elsewhere. The researchers say their machine-learning algorithm correctly guessed whether a cytokine had been injected, and which one had been used, on average 83 percent of the time; if choosing randomly, it would be correct 33 percent of the time. “The idea that you can go from a compound signal and decode it into a signature for a certain signal could be quite useful beyond just the vagus nerve,” says Isaac Chiu, an assistant professor of microbiology and immunobiology at Harvard Medical School who was not involved in the research. “In the study they used simple conditions with two cytokines, which is a good first step. In a complex disease, however, it may be complicated by many types of neural signals, so it is not yet clear you would be able to decode all the signals to get meaningful information.”

The researchers are also using their approach to examine metabolic changes, injecting mice with insulin or glucose and looking for vagal responses. By assessing these via more advanced machine-learning techniques, it is possible to correlate vagal activity with blood-glucose levels. In principle this could result in a “neural glucometer,” according to Zanos.

“I think this study is fascinating,” says Konrad Kording, a professor of bioengineering and neuroscience at the University of Pennsylvania who was not part of the work. “It’s another sign that the field of neural decoding is growing up. Instead of focusing on the possibility of decoding, they use decoding as a tool to understand biology. Decoding is moving from being a research field to becoming a tool useful across science.” Kording imagines that in about 20 years the field could help produce “a Luke Skywalker–type prosthetic device,” referring to the protagonist’s lifelike artificial hand in the Star Wars franchise.

“Bioelectronic medicine combines neuroscience, molecular biology and bioengineering to tap into the nervous system to help the body heal itself,” says study co-author Kevin Tracey, Feinstein president and CEO. “Making effective and targeted bioelectronic medicine devices relies on how much information we have about a condition and its neural signaling. For example, if we know how the neurons in the vagus nerve are signaling inflammation in rheumatoid arthritis, we can develop devices that either stop or modify this signaling and act only when it’s needed.”