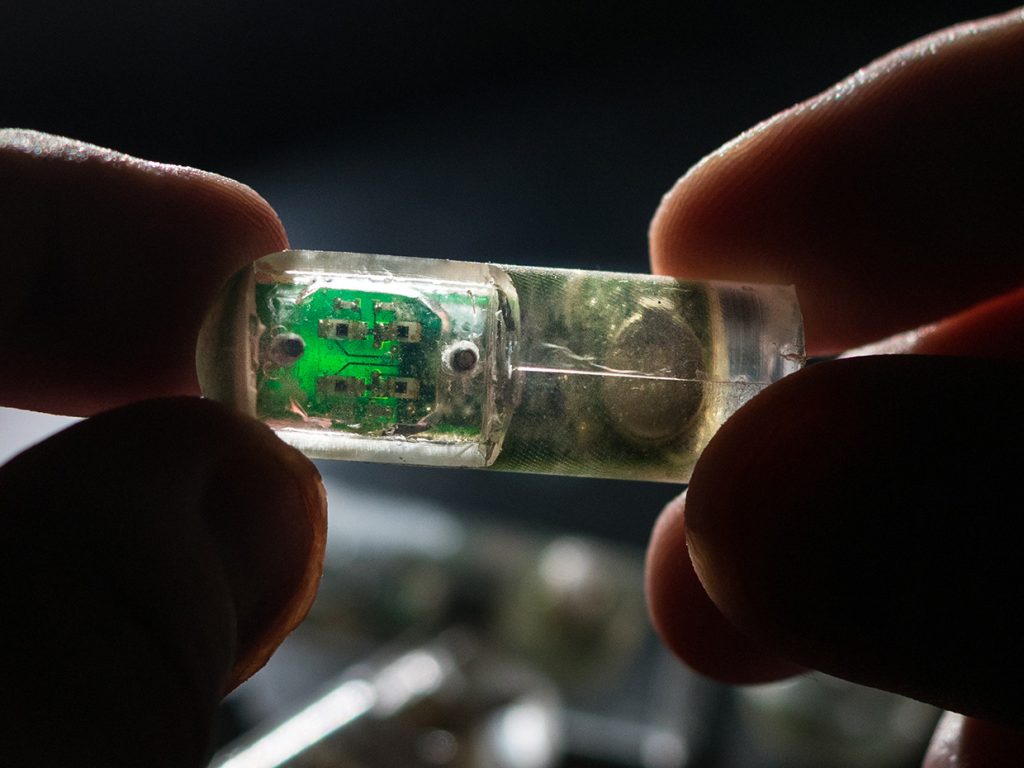 In the latest edition of “What would you be willing to swallow?”, researchers at MIT today unveiled an ingestible sensor that combines engineered bacteria with ultra-low-power microelectronics to sense changes in the gut.

The sensor, roughly the size of a large pen cap, needs to undergo miniaturization and further study before it can be used in humans, but the team hopes to begin a clinical trial within a year or two, said senior author and MIT bioengineer Timothy Lu at a press conference this week.

The prototype, described in the journal Science, successfully detected signs of excessive bleeding in the gut of pigs. Bleeding in the gut can be indicative of a serious health condition, including a gastric ulcer or colorectal cancer.

Lu emphasized that the modular system can be tailored to sense many other health markers in the gastrointestinal tract. “All you have to change is the front-end sensor to detect a molecule of interest. It’s pretty interchangeable,” he said.

Ingestible sensors are a popular area of research, being investigated for uses ranging from tracking food ingestion to detecting gases in the gut, a notoriously hard area to access. Doctors currently rely on invasive procedures such as colonoscopies and biopsies to identify and monitor gastrointestinal health conditions.

Synthetic biologists have developed numerous biosensors that sense and report on gut changes in animal models, but it hasn’t been easy to transmit that biological information out of the body, says Lu. To overcome that issue, his team married a biological sensor—a strain of probiotic bacteria genetically engineered to detect blood in the gut—to an electronic sensor and wireless transmission platform.

Led by graduate student Mark Mimee and former MIT postdoc Phillip Nadeau, the team first engineered a genetic circuit to detect blood. To do so, they borrowed DNA from a strain of bacteria used to produce dairy products that has the ability to detect heme, a component of blood. They combined those heme-detection genes with genes that cause the cells to light up, or glow, when heme is present. Finally, they inserted the whole construct into the genome of a type of probiotic E. coli that is safe to ingest.

With the cells ready, the team integrated them into a small capsule that contained phototransistors to detect the light from the cells; a microprocessor; a button-cell battery; and a wireless transmitter to send the signal out of the body. All these components were then wrapped in a membrane to keep the cells and electronics contained and free from moisture, while still allowing small molecules from the environment to diffuse in.

The researchers tested the resulting cylinder, about 4 cm long, in pigs and were able to accurately detect blood in the gut using a commercial receiver connected to a laptop or cell phone. They also adapted the sensor to detect two other molecules, a sulfur-containing ion linked to inflammation and a signaling molecule associated with infection, but neither construct has yet been tested in animals. “These biosensors are really modular,” said Mimee at the press conference. “We can [adapt] these living systems to sense conceivably any sort of biomarker.”

The device is still a prototype: “No one has swallowed it yet,” said Nadeau, who hopes to soon reduce the size by one-third. Still, Lu imagines the sensor eventually being used in lieu of colonoscopies, allowing patients to simply swallow a large pill for a day (and, yes, then excrete it) to monitor the health of their GI tract. For now, the limitation moving forward is “funding and paperwork,” said Lu.