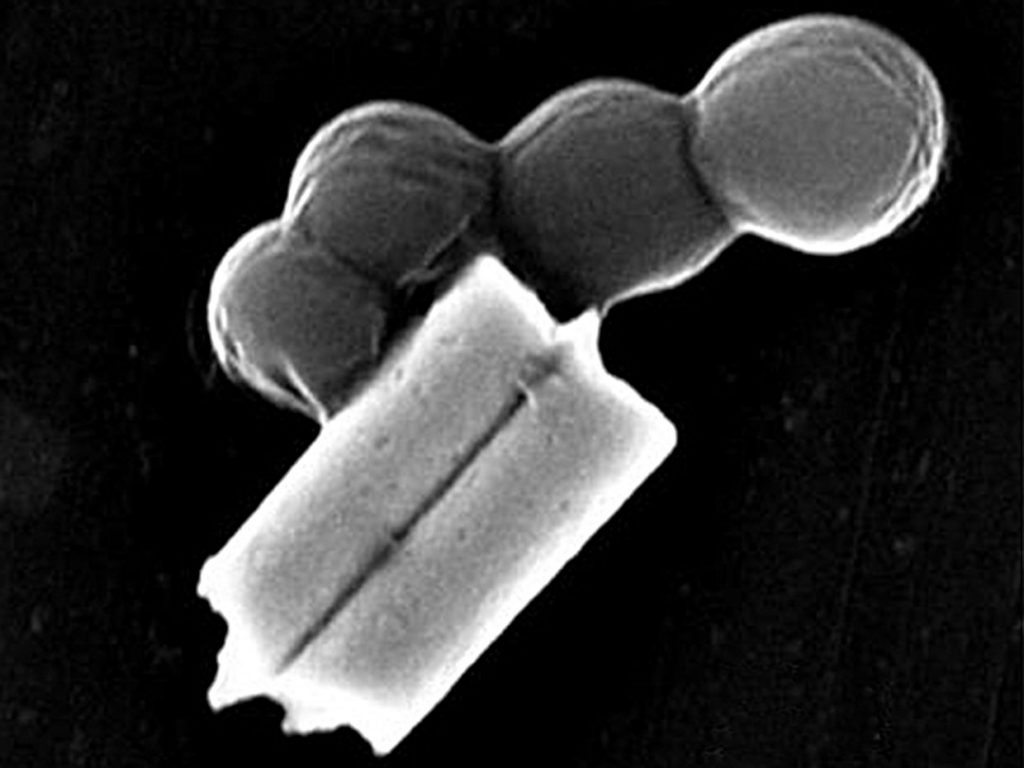 Nanorobots nab bacteria, spherical in shape, that cause a hard-to-treat infection known as MRSA.

Researchers have come up with all sorts of ways to propel tiny robots deep into the human body to perform tasks, such as delivering drugs and taking biopsies. Now, there’s a nanorobot that can clean up infections in blood.

Directed by ultrasound, the tiny robots, made of gold nanowires with a biological coating, dart around blood, attach to bacteria, and neutralize toxins produced by the bacteria. It’s like injecting millions of miniature decoys into blood to distract an infection from attacking the real human cells.

The invention, developed in the labs of Joseph Wang and Liangfang Zhang at the University of California San Diego (UCSD), was described today in Science Robotics. The researchers hope the robotic detoxification system could provide an alternative to the multiple, broad-spectrum antibiotics currently used to treat life-threatening infections—one that can work in minutes.

So far, they have demonstrated the proof-of-concept system in the lab using test tubes of blood. Next, they hope to scale up and refine the process enough to test it in mice, says Berta Esteban-Fernández de Ávila, a postdoc in Wang’s lab who led the study.

The bacteria busters add to the growing list of tiny robots that can deep dive into the human body. Many of these were built with drug delivery in mind, and they move in imaginative ways. There’s the squishy clockwork biobot, the jackhammer, the stomach acid-driven nanorocket, the magnetic field-guided nanoparticles, and even robots propelled by sperm cells from bulls and sea creatures.

UCSD’s latest bot could have applications in drug delivery, too. But for now, the team is focused on fighting gram-positive bacterial infections. In that type of infection, there are two elements to battle: the bacteria themselves, and the toxins produced by the bacteria. Toxins poke holes in red blood cells, and bacteria attach to platelets in the blood. Both actions eventually destroy their targets, resulting in serious infections in humans.

Shown here is a nanorobot without its coating of red blood cells and platelets (top) and a coated version of the same biobot (bottom).

To address both of these forces, the UCSD team cloaked the nanowires in exactly what the pathogens are looking for: platelets and red blood cells. The fused coating, derived from the cellular membranes of these two components of blood, disguise the nanorobots, making them look like the real thing and giving them biological functions.

When they unleash the cloaked biobots in the blood, the bacteria attach to what seems like a platelet, only to find themselves held captive on a nanowire. The toxins interact with what appears to be a red blood cell, and get neutralized in the process. Bonus: The disguise is good enough that the body’s own defense systems might not notice the nanowire invaders, either.

Esteban-Fernández de Ávila and her colleagues used ultrasound waves to control the movement of the nanowires, which convert the acoustic energy into motion. With this system, the team was able to increase the collisions between the nanowires and their pathogenic targets, accelerating the detox process.

Guiding the collisions with ultrasound is “not the same as putting static nanowires in solution and just waiting,” says Esteban-Fernández de Ávila. “When we apply the acoustic field, the movement of the nanowires produces a very rapid interaction with the pathogen.”

The team tested the nanorobots on methicillin-resistant Staphylococcus aureus, or MRSA, one of the toughest infections around. Samples treated with acoustically-propelled robots produce a 2.4-fold lower rupture of red blood cells and a 3.5-fold increase in bacteria binding, compared with static nanorobots.

The nanorobots aren’t going to replace antibiotics anytime soon, but the UCSD team is working on it. Next steps include scaling up the acoustic design, improving the propulsion in complex biological fluids, evaluating other types of propulsion mechanisms, and testing the treatment in mice. After that, they’d like to load up the membranes with high amounts of drugs to see how well it can perform targeted drug delivery.