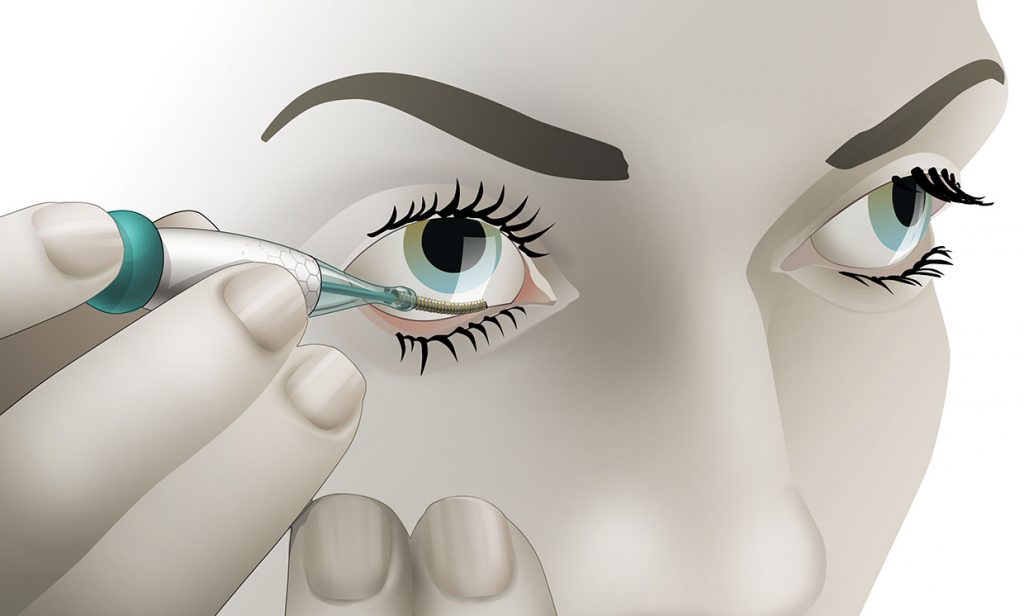 The Noviosense tear-glucose sensor slips in right behind the lower eyelid.

Update: On 16 November 2018, Alphabet’s Verily said in a blog post that the company would suspend its work with Alcon to develop a glucose-monitoring contact lens due in part to “the challenges of obtaining reliable tear glucose readings in the complex on-eye environment.”

For decades, researchers have clamored to build a wearable, noninvasive glucose monitor. Such a device could help the millions of people living with diabetes track their glucose levels more closely, without the pain of pricking their skin with needles.

Scientists have tried tracking glucose in sweat, saliva, breath, and urine. They’ve tried to measure it in blood from outside the skin using spectroscopy. And lately, several groups, including Alphabet, have proposed measuring glucose in tears using smart contact lenses.

But so far, no one has succeeded. The quest for a noninvasive, wearable glucose monitor has mostly left in its wake a trail of dead companies and jaded researchers.

Now, there’s a glimmer of hope. Last month, a startup company in the Netherlands called Noviosense quietly published data on human testing of its tear glucose sensor. The study was small—only six participants—but the results, published October 12 in the journal Biomacromolecules, look promising.

“These are the best results I have seen yet” on tear glucose, says John L. Smith, a former executive for blood glucose meter maker LifeScan, who has devoted the latter part of his career to evaluating noninvasive glucose-sensing technologies as a consultant. “But substantial improvement is still needed for it to be good enough for monitoring.”

Coming from Smith, that is high praise. Smith is a well-known skeptic of wearable, needle-free glucose monitors. In fact, in the 2018 edition of his book The Pursuit of Noninvasive Glucose: Hunting the Deceitful Turkey, Smith all but says the technology will never come to fruition: “This [book] may be the final update this subject needs.” He continues, “Many participants and observers are beginning to feel this is an idea whose time never came and which may soon be gone without ever seeing success.”

It helps that Noviosense has taken a different approach to measuring glucose in tears. Instead of putting a sensor in a contact lens, Noviosense’s device is placed by the user under the lower eyelid. There, it accesses a reliable flow of tears that better reflects the true levels of glucose in the blood, says Christopher Wilson, founder and CEO of Noviosense. Plus, the design doesn’t dry the eye or impede vision, as contacts can, Wilson says.

Noviosense’s flexible, spring-shaped coil drops in behind the lower eyelid—something users can do themselves—and naturally stays put. The spring-shaped electrodes are coated in a biopolymer containing an immobilized enzyme that, when exposed to glucose, starts a chemical reaction. That reaction results in the oxidation of hydrogen peroxide, which can be detected by the electrodes using a chronoamperometric measurement.

In Noviosense’s final design, the device will wirelessly transmit glucose data to a phone when it is held near the eye, or, for continuous measurement, to a pair of eyeglasses, Wilson says. For its first human study, Noviosense used wired sensors because the company’s wireless components are still in the process of being shrunk to fit the sensor tip, and the wired version is needed to develop the device’s calibration algorithms, Wilson says.

The company compared its device to needle-based glucose monitors that measure the analyte in both blood (the gold standard) and interstitial fluid (a close second in accuracy). The results: 95 percent of the data points from tear glucose measurements were either the same as blood or fell within an acceptable range of error. The tear data wasn’t as good as blood, but it was about the same as interstitial fluid.

That beats previous studies by a lot. “There are more than a dozen literature reports that attempt to show correlation between blood and tear glucose and most of the results range from essentially no correlation to perhaps a 60-70 percent correlation,” which is just not good enough, says Smith.

The problem with many of those previous studies lies in the method of tear collection, Smith says. Researchers have tried things like capillary tubes and filter paper. They’ve also tried to mechanically or chemically stimulate tear production to get bigger samples. But these methods mess with natural tear flow and thus the ratio of glucose.

Rather than stimulating tears or disrupting them in any way, Noviosense’s device acts as a flow cell under the eyelid and accesses what Wilson calls “basal tears.” These tears are produced at a constant rate and are “not a reaction to emotion or wind or a foreign body or rubbing.”

Despite the fact that the device is 2 centimeters long, Wilson says that it’s comfortable, it doesn’t pop out with eye rubbing, and he and other Noviosense employees have worn it at length.

Perhaps the more obvious place to put a glucose sensor is in a contact lens, since a large percentage of people already wear them. Indeed, many groups have proposed some clever engineering for this. For example, researchers at the Ulsan National Institute of Science and Technology, in South Korea, earlier this year reported a stretchable contact that monitors glucose without distorting the wearer’s vision.

Even Alphabet, through its life sciences group Verily, has jumped in. In 2014 the company announced it was developing a smart contact lens that would monitor glucose in tears. But Verily, and its partner Alcon, a division of Novartis, have since gone quiet on the matter.

Contact lenses present their own set of challenges. They tend to break up the lipid bilayer of the eye, making it dry, Wilson says. Fluid can also pool up behind contact lenses, rather than allowing a fresh supply to constantly pass through. These factors create errors in tear glucose measurements—or at least that’s Wilson’s hypothesis, based on the literature and his conversations with contact lens experts.

Whatever the reasons, none of the groups developing smart contact lenses have reported reliable glucose results in humans, says Smith, and “many researchers think that the Verily lens has not been successful,” he says.

Neither Verily nor Alcon responded to IEEE Spectrum’s requests for updates on their smart contact lens project.

Noviosense has already begun its next clinical trial, which involves 24 additional people, all with Type 1 diabetes. Each person will wear the in-eye device for about half a day, Wilson says. The goal will be to determine, in a larger patient population, whether the device is as accurate as needle-based devices on the market that measure glucose in interstitial fluid.

Glucose measurements taken from interstitial fluid aren’t as accurate as those from blood. But they are good enough, and both U.S. and European regulators have approved such devices for sale on the market from companies such as Abbott, Dexcom, and Medtronic.

Their patchlike devices, called CGMs, or continuous glucose monitors, are wearable and adhere to the skin, typically on the abdomen or the back of the arm. The electronic patch injects a small needle just under the skin, where it tests for glucose in interstitial fluid using an electrochemical analysis similar to that in Noviosense’s device. The patch can be worn for up to two weeks, depending on the model.

Noviosense compared the performance of a CGM on the market made by Abbott to that of its own in-eye device. Using a statistical analysis called median absolute relative difference (MedARD), Noviosense’s device scored 12.5 percent—on par with Abbott’s CGM, according to Noviosense’s report. The company hopes the data from its next 24 subjects will also match the accuracy of Abbott’s device.